Marge joined Onondaga Audubon in 1953 and was soon leading field trips and mentoring junior birders. In 1963, she became editor of The Kestrel, a position she held for several years. She was also the chapter’s longtime delegate to meetings of the New York State Ornithological Association.

Marge took part in every possible bird survey, including big days, Christmas counts, breeding bird surveys, and waterfowl counts. In 2017 she received the Kirkland Bird Club’s annual Conservation Award, at which time she was said to have been birding for about 85 years.

Marge served as Region 5 Kingbird editor for decades and was known for her record keeping. Matt Perry, current Region 5 co-editor, posted an elegant tribute to Marge on the OneidaBirds listserv at the time of her death.

“She was an extraordinary birder conservationist, archivist, and activist,” Perry wrote. “She contributed to the Kingbird for more than 50 years and was a great keeper of records. We still consult her great box of records on a regular basis when writing reports. “

Dick Askeland, a longtime member and generous supporter of Onondaga Audubon, passed away on Monday; he was 76. Always a quiet, supportive presence, Dick was a regular visitor at Derby Hill and often in attendance at monthly program meetings. Among those who knew him, he will be fondly remembered and sorely missed.

An avid field birder, highly skilled in identification, Dorothy Crumb had a remarkable knowledge of birds. For many years she was an active director of Onondaga Audubon, contributing greatly to the organization’s growth. Editor of the History of Onondaga Audubon published for the chapter’s 50th anniversary in 2001, she was as well, co-author of City Cemeteries to Boreal Bogs birding guide. Dorothy was also a regional co-coordinator for both the first and second breeding bird atlases of New York state. 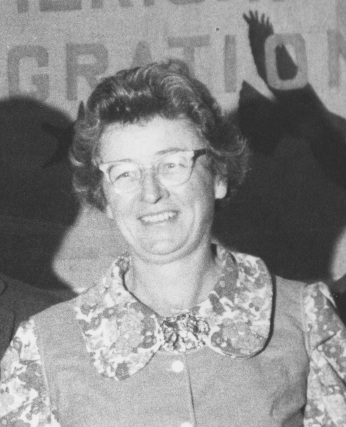 We asked a few of her friends to tell us about Dorothy and their relationship with her.

I actually got to know Dorothy Crumb better during the years of the second breeding birds atlas of New York state project. She, along with Bill Purcell, were regional coordinators and I was informally named the co-coordinator and chauffeur. We both enjoyed working on the atlas project immensely. My Subaru Forester passenger seat was very comfortable for her and consequently, in the spring and summer of 2004, 2,000 miles were added to the odometer of the congenial car while “atlasing” in southern Onondaga and Madison counties. Often Brenda Best was the third birder. Needless to say, birding with Dorothy was a preeminent learning experience. I had to admire not only her skill in identification, but also her profound knowledge of bird behavior and biology. On these outings when we saw people in the yard, or when there was a bird feeder visible, Dorothy made it a point to stop and get information about local birds. Often the people invited us to stop and rest and sometimes offered us cold drinks. I remember being shown a most fascinating barn with lots of old farm equipment displayed on the walls. Dorothy was in her element. I only wish I could remember the location of that barn made into a veritable farmer’s museum.

The scope of the work was great, and to be able to cover some more distant blocks, Dorothy would plan and organize an “atlasing party,” consisting of several cars with an added number of birders. Communication was by walkie-talkie. The most extensive of the forays was to the Bear Swamp area (now the Great Swamp Conservancy – editor) in Madison County, a large wild area which promised a good catch of birds. We stayed overnight in a local guesthouse so that we could have an early start the next day. Another such overnight effort was to Herkimer County, with the atlas coordinator from the Department of Environmental Conservation, Kimberly Corwin, joining us. That area had the greatest number of unfinished blocks in our region, and we were able to fill in some of the blanks. Dorothy was an excellent organizer so our trips worked without a hitch. After a good, intense day and before dinner, Dorothy had a treat for us: Bully Hill white wine (unfortunately I forgot the exact name but it had something about friendship as part of the name). Somebody would contribute cheese and crackers, and we had a party while discussing our adventures of the day and planning for the next one.

When the project was finished, Dorothy remarked that, unfortunately, she would not be around for the next census. However, I am sure that her contributions to the first and second atlas must have given her much-deserved feeling of satisfaction. Paraphrasing Gen. MacArthur I want to say: “Old Birders never die, they just fade away”, but not from our memories.

I met Dorothy Crumb in the fall of 1980 when I first started birding and attending Audubon meetings at Illick Hall on the SUNY-Environmental Sciences and Forestry campus. Dorothy would get up in front of the group and give the local bird report each month. Being a new birder, I was amazed at how many birds were around and how knowledgeable Dorothy was! She became my birding role model. I wanted so much to know all she knew. We did some field trips together. She was a great leader and teacher. She helped me to sort out sparrows, no easy feat for a beginner! We took a wonderful trip together to South Texas with Wings, where I met David Sibley, who was our trip leader. I was impressed that Dorothy already knew him. This was my first guided birding trip and it seemed so far away! And Dorothy had birding friends even in this distant place!

One of the reasons we got along so well is that we both had Irish setters and loved them so much. I got my first boreal chickadee in Dorothy’s yard. Dorothy loved ice cream and no field trip was complete without a stop at an ice-cream stand on the way home. Dorothy was a wonderful artist and collector of art. There were very few empty spaces on her walls. They were covered in pictures, most of them birds, but not all. She was also a published author, and I treasure my autographed copy of Owls ‘N Things. Dorothy was also the regional coordinator for both the first and second breeding bird atlases of New York state. She recruited me when I had only been birding a couple of years and I was still so unsure of my birding abilities, but working on the atlas with Dorothy’s guidance definitely made me a better birder and by the time the second one rolled around, I more than doubled the number of blocks I covered and did a much better job!

All in all, Dorothy was such a good person and was fun to bird with. She taught me to notice little details and to look at the overall picture as well. I loved how she would always notice “expressions” on little bird faces and take delight in their funny actions. I will miss her.

The first Hawk Migration Association of North America Conference (HMANA) was held in Syracuse in 1974. Dorothy Crumb was head of the local organizing committee and along with Karen Slotnick, Fritz Scheider and others made this seminal event happen. In her early 50s at the time DW Crumb, was a force of nature organizing the conference. Notable hawk watchers such as Maurice Broun, first curator of Hawk Mountain, and author Mike Harwood (The View from Hawk Mountain and other books) were present. Scheduled in late April to, take advantage of a field trip to Derby Hill on the Sunday of the weekend, this effort brought together the Who’s Who of northeastern raptorphiles. I say northeastern because with the exception of a few sites, hawk migration study at that time was largely restricted to the northeastern quarter of the continent.

Dorothy organized the effort like a military campaign down to the smallest detail. This included sending one of the youngest (and therefore most naïve hawk watchers) to the airport to pick up a man with a reputation within the hawk watching community for being very difficult. After this friendly chore (and he did not even tip when the driver was hauling his bags) I think it took some time for me to forgive DWC. The conference; however was a roaring success resulting the formation of HMANA and the start of its many contributions. Over the last forty years the data base developed has a myriad of information covering much of North America extending to Central America. These data are proving very valuable in our rapidly changing world where raptors as a group are high quality canaries in the coal mine.

The odds on scheduling a field trip to Derby Hill’ or any other hawk watch, a year out and getting the big flight of the season are not good. The fates were with Dorothy that day as roaring south winds and warmth ahead of a cold front pushed hordes of Broad-wings and other April migrants past the north lookout. I remember Maurice Broun and Harold Axtell, two of the pioneers of North American hawk observing, nearly dancing with delight at the sight.   Most of those present observed at their watches in fall so the sight of Rough-legged hawks mixing in Broad –wing boils blew their collective minds. The good flight continued through the next day and to the delight of those of us present Derby Hills first Black Vulture sailed by the lookout.

Except for Karen and I all the other folks mentioned herein are no longer with us. Their legacy from 1974 lives on in HMANAS current good efforts and the good works of Onondaga Audubon at Derby Hill

In March, 2012 Bob and Ellie Long received the Norman I. Stotz Award from the Audubon Council of New York State for extraordinary volunteer service on behalf of the Audubon Society and the environment.

With over 40 years of active participation in the chapter Bob and Ellie have been recognized for their exemplary leadership and dedication.

Bob served four terms as Vice-president and three terms as President of Onondaga Audubon. In addition he served as editor of The Kestrel newsletter eight years. His leadership was instrumental in establishing the first Walk-a-thon for Save the County in 1972; the establishment of a board of managers for Derby Hill Bird Observatory in 1981; and the organization of a management committee for Noyes Sanctuary in 1994. Ellie served as President of the chapter from 1987 to 1989.

As editor of The Kestrel Bob initiated a series of birding hot spot articles and conservation issue editorials that ranged from local waste management challenges to the need for protection of the Tongass National Forest in Alaska.

Both Bob and Ellie served on the board of directors for years and were always willing to take on any number of tasks running a chapter required. Bob and Ellie continue to provide guidance and inspiration to the chapter. We applaud them for this honor, it is well deserved.