Derby Hill was discovered as a hawk watching site in the mid-1950s, when Fritz Scheider of Syracuse, NY theorized that hawks in spring must be funneled east by Lake Ontario, and that a point with some elevation in the southeast corner of the lake would probably make a good vantage point for observing these migrating hawks. Derby Hill is exactly that.

Some 20 acres were purchased by Syracuse University and The Nature Conservancy in 1966, and this property later came under management of the Onondaga Audubon Society, who still own the cottage and the grounds, and run the hawk watch each spring. 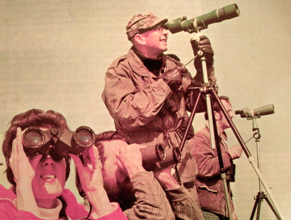